Current Connection at
​the Deanne House

A language of resistance and co-optation

"​Several contemporary artists maintain the critical feminist agenda of the 1970s. They refuse to buy into the present neoconservative backlash against the social advances that were made by the previous generation of artists. As support for this project of refusal, these artists have access to a cornucopia of feminist and postmodernist practices and theories that have been accumulating since the 1970s, when women in the visual arts challenged the art world's modernist cannon. The cornucopia is concerned with representation and signification.

By introducing analyses of the social practices of production and consumption into art, feminist and other postmodernist practices inflicted the coup de gråce to the Greenbergian tenets of truth to the material and the universality of art reception (like no-iron polyester, these tenets guaranteed the self-sufficiency of visual and aesthetic experience). Predictably, provocatively, the antipathy between feminism and modernism suggested a paradigmatic shift. Many of those who advocated the shift were linked by a common set of methodological positions: validation of collaborative attitudes over individualistic ones, careful attention to audience response, use of personal lives and daily activities as sites of political struggle, reappropriation of the body and the redefinition of power. Many artists and cultural critics began to work together toward a creative revision of the status quo.

​At some moment during the challenge to modernism, several artists realized that textile practices are rich sites to explore and question the assumptions made about subjects like women's work, femininity and domesticity. The oppressive constraints of the textile traditions were recognized and new ways of negotiating meanings through textiles were sought. "
​    Mireille Perron
Common Threads: Local Strategies for " Inappropriated " Artists
MATERIAL matters
The Art and Culture of Contemporary Textile
edited by Ingrid Bachmann and Ruth Scheuing 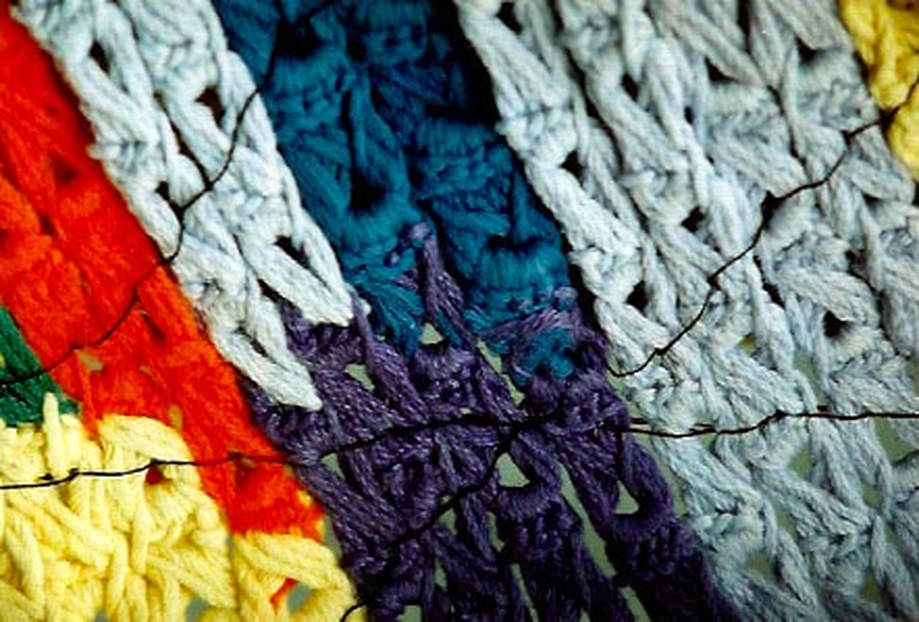 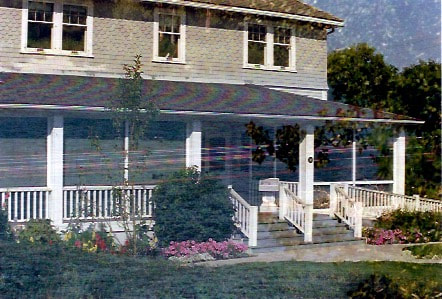 Physical description of Current Connection at the Deanne House

Twenty two flags in a variety of sizes were constructed for the installation by a number of stitchery methods; sewed, crocheted, woven, tied. The strips were previously used to span the Elbow River in September 1991. Every colourful flag was attached to an 8 foot aluminum flag staff with a gold acorn finial. Flags and staffs were placed in pairs and secured in the openings of cinderblocks.

These twenty two distinct flags flanked the second floor Courtroom of the Deanne House, forming an honour guard around the six women represented on video tape in the centre of the room. Flat on the walls of the Courtroom are a Union Jack and Red Ensign from Captain Deanne's period. In the centre of the room the six video monitors and VHS players were placed on the original five scuffed and worn backless benches. The courtroom was used to teach elementary school groups about the turn of the century justice system.

Monitors were set-up on the five benches in a triangular formation with the apex at the front of the Courtroom and alternate benches left empty for viewer/listener seating. To view the videos, the viewer/listener sat on a bench with her back to the Judge's desk. Each monitor was dedicated to and signed by one of the six women who gave a gift of telling her own story. The signature on paper was placed in a clear plastic holder and displayed on top of her monitor. Each woman's video was from one to two hours in duration. Two sets of earphones were attached to every monitor, requiring the viewer/listener to interact in a physical way in order to put sound to image.

On the wall of the Courtroom behind the Judge's chair we placed a framed, photocopied document, written by ourselves with pen and ink, much like the existing framed and photocopied period documents on the other walls of the room. Its content: a chronology of precedent setting women's events that did happen, could have happened, or should have happened.

Outside the Courtroom, in a small vestibule, a set of our celebration flags marked the entrance of the installation and an offering of daily tea was set out. Visitors were welcome to relax, take comfort in a hot drink while viewing the installation.

Down the hall from the Courtroom, the women's lounge was used to display in a private context two flags and a video of the crocheting group of women from Murdock Manor's 16th floor lounge. They were sharing their stories during a weekly meeting in the comfort of a supportive group. 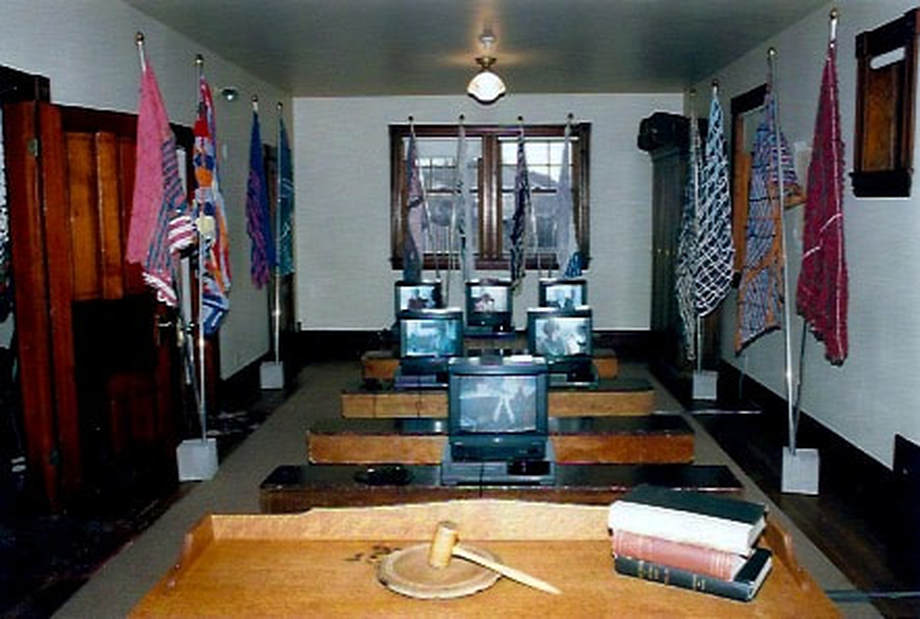 The second floor courtroom and women's lounge of the historic Deanne House were the main areas for this site specific installation. These rooms were chosen because of their significance in regard to women - the courtroom being the seat of judicial authority where just recently women were described as "reasonable persons".  Previously many legislators and judges viewed "reasonable persons" to be male. At the other end of the power spectrum is the women's lounge where often women shared their private stories.

This installation critiques the prescribed position of women in our society. In particular, the older women whose work, wisdom and histories are often marginalized. Through the voices and images of women recalling their memories and experiences a gap is bridged between past and present, and between conventional expectations and women's realities.

Along with the celebration of women's voices is the honouring of the cooperative spirit, expressed by their needlework. The beauty of the emotional, repetitive and time consuming efforts of the needle workers is used to destabilize patriarchal symbols and celebrate the traditions relegated to the private and undervalued realm of domesticity. These are some of the same joys created by the cooperation necessary to make a quilt, gather food or build a barn in history. 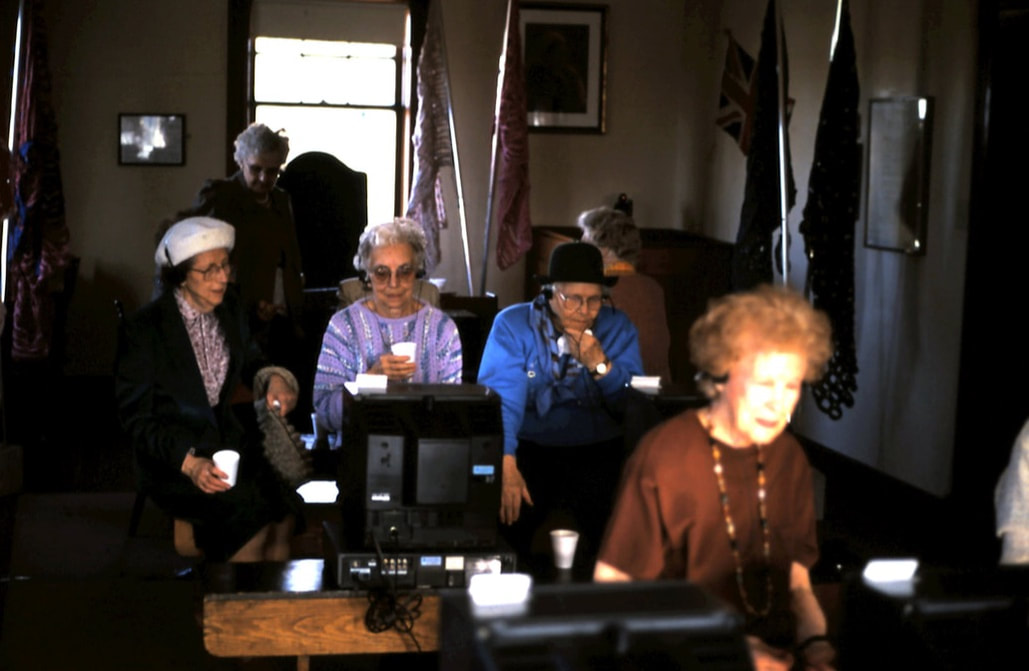 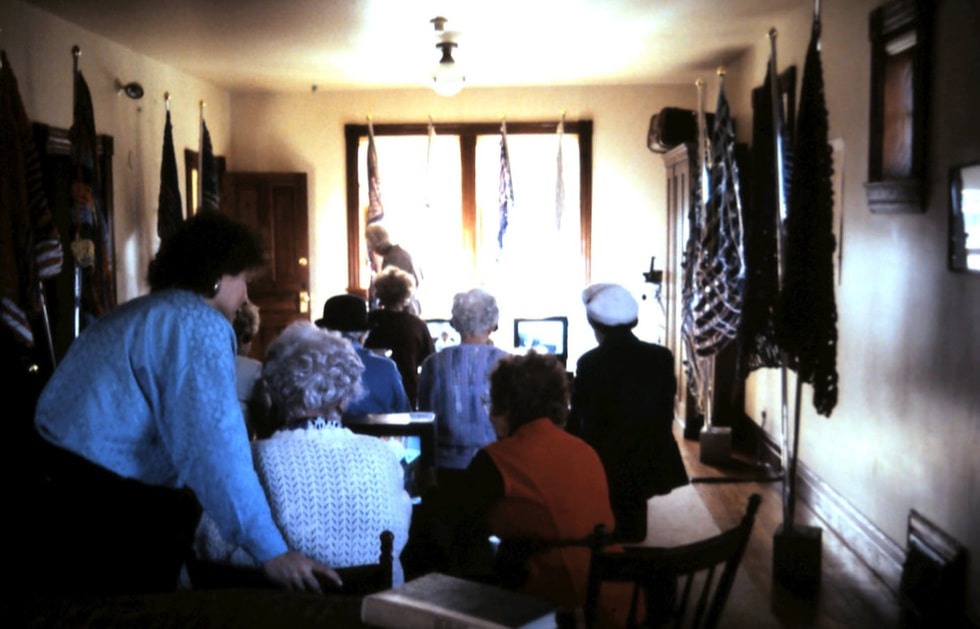 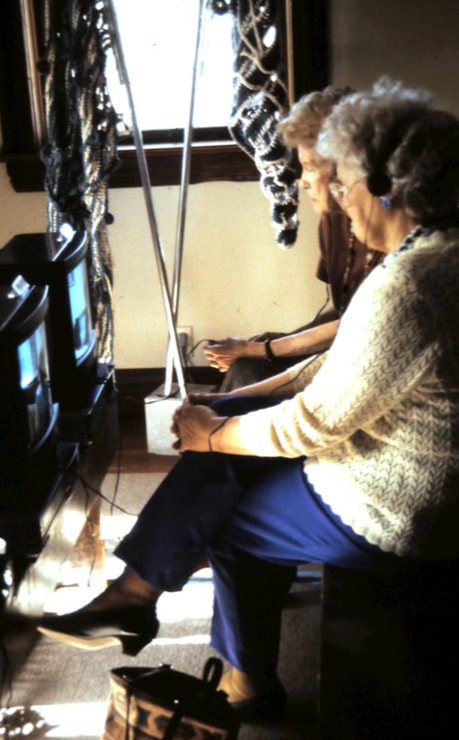 " It is important to point out that most of the elderly women, who had been involved in Current Connection from the first group meeting in Murdock Manor, were present the night of the opening at the Deanne House. Like their performative presence on the Elbow River, their presence at the opening was more than a celebration: the exchange of stories continued.

The women involved in Current Connection (1&2) transformed cliched notions of women gossiping while they crochet. They successfully let people know that their collective effort was necessary and worthwhile in the rewriting of women's history. More modest in scale, Current Connection (1&2) is reminiscent of the spirit of Suzanne Lacy's Crystal Quilt project. In both projects, the artists paid careful attention to the process of empowering older women, to the politics of rendering them visible social subjects and to the intense negotiations with local as well as historical authorities. These are elements of a discursive strategy that allows rich critical meaning to emerge from the lives of older women. For Joan Caplan and Mary Lou Riordon-Sello, the empowerment of local women is the warp of everyday life. Those who take time to understand the meanings that emerge from Current Connection (1 & 2) empower themselves, too, providing the weft that is needed to complete this regional social fabric" 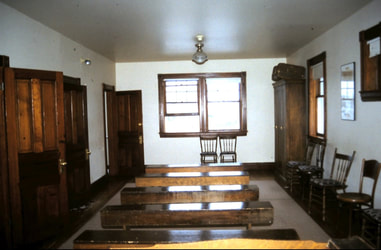 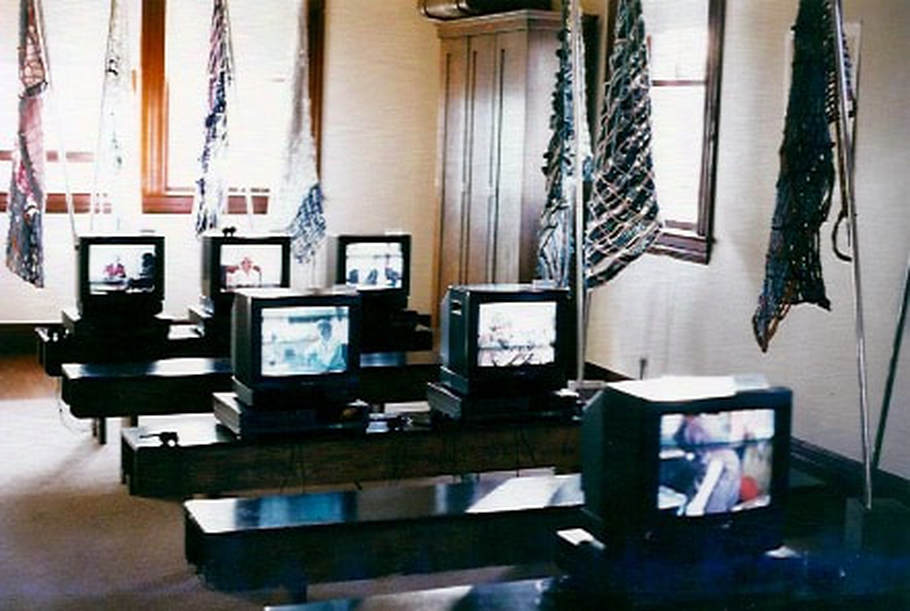 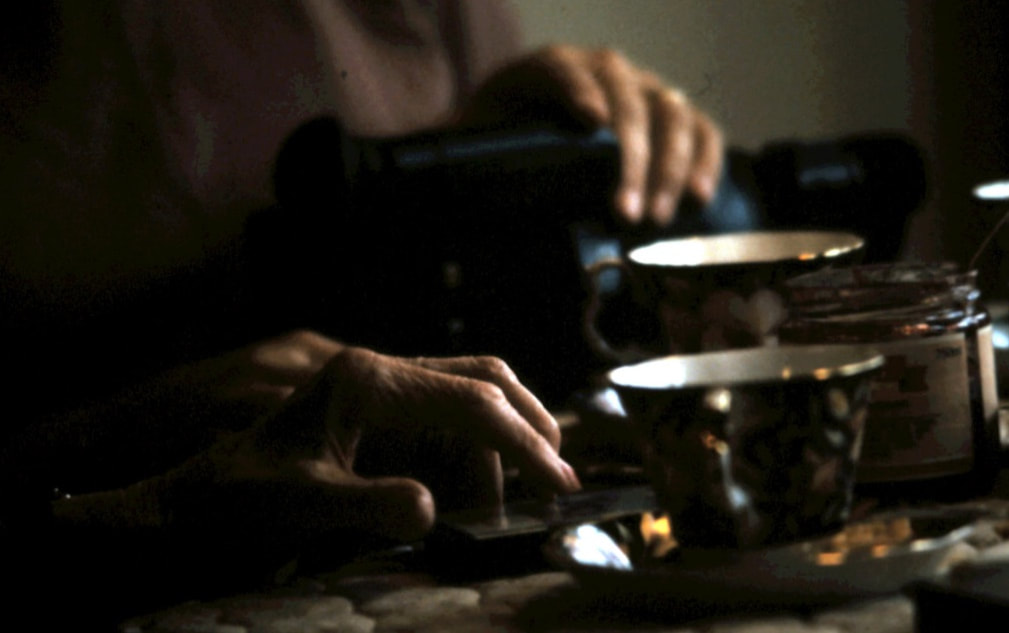 Mary Ardelyan being interviewed by  Mary Lou and putting Mary Lou into some kind of an apparatus. 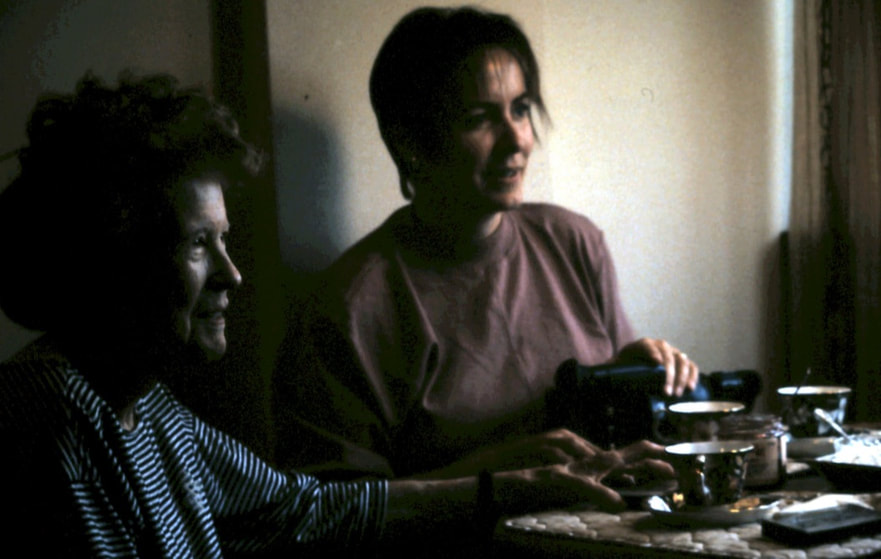 Beulah Cavendish with Mary Lou, holding her video camera, about to do the interview 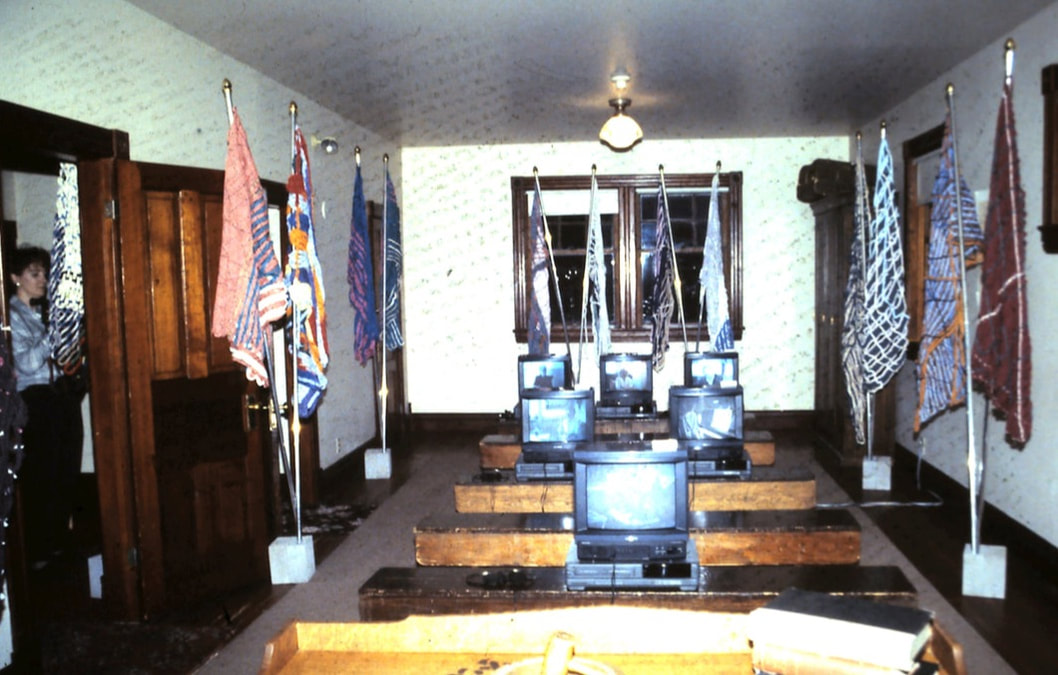 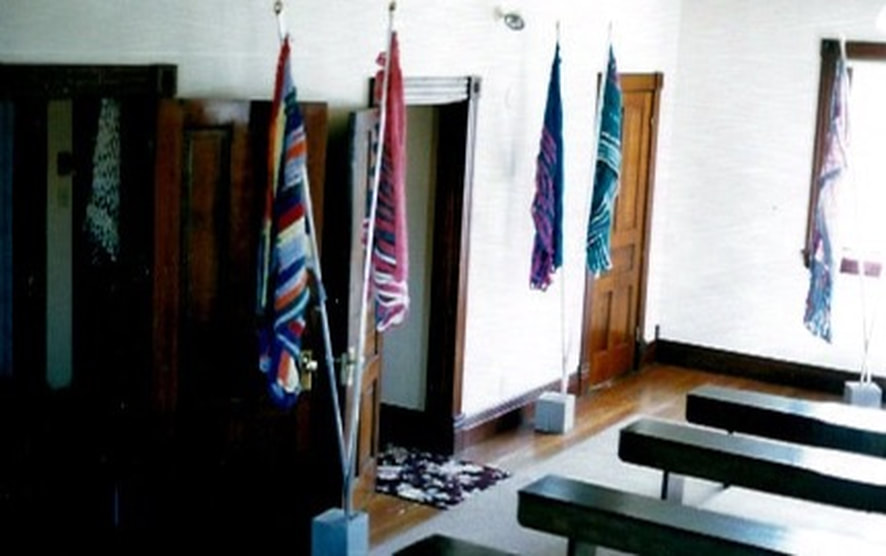 A framed chronology of women's slow progress toward legal rights was hung on the wall behind the judge's bench.
​" 1916: The Alberta Legislature extends the vote to women. Native women are not included in the eligibility to vote"
the following newspaper article is a reference, not part of the installation
The Globe and Mail, Saturday, December 14, 1991
REDEFINING REASONABLE
Justice removes her blindfold 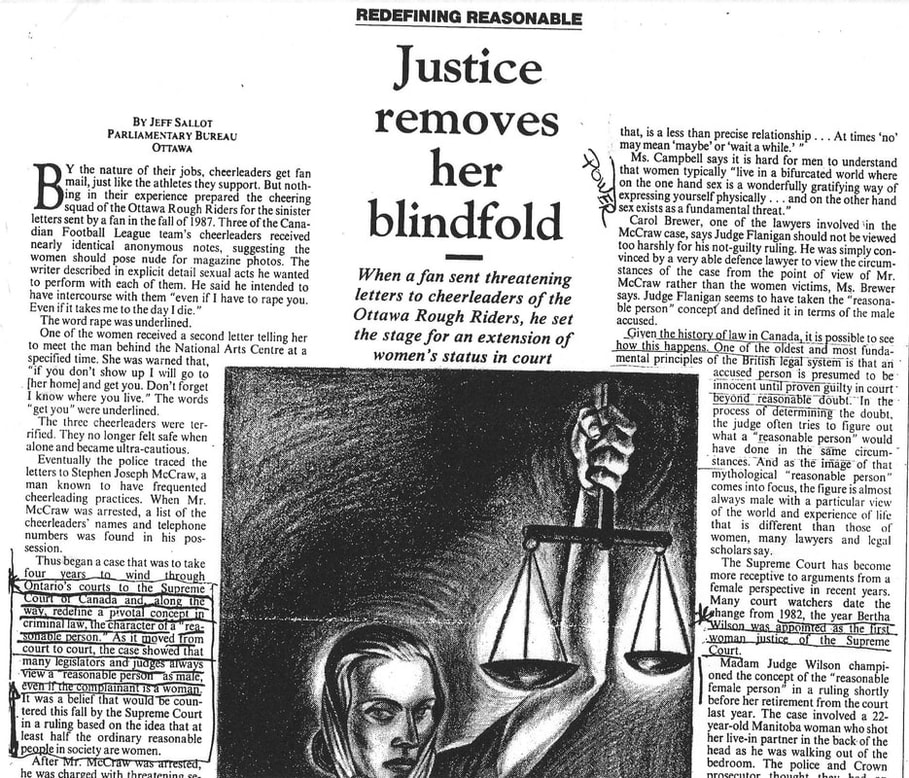 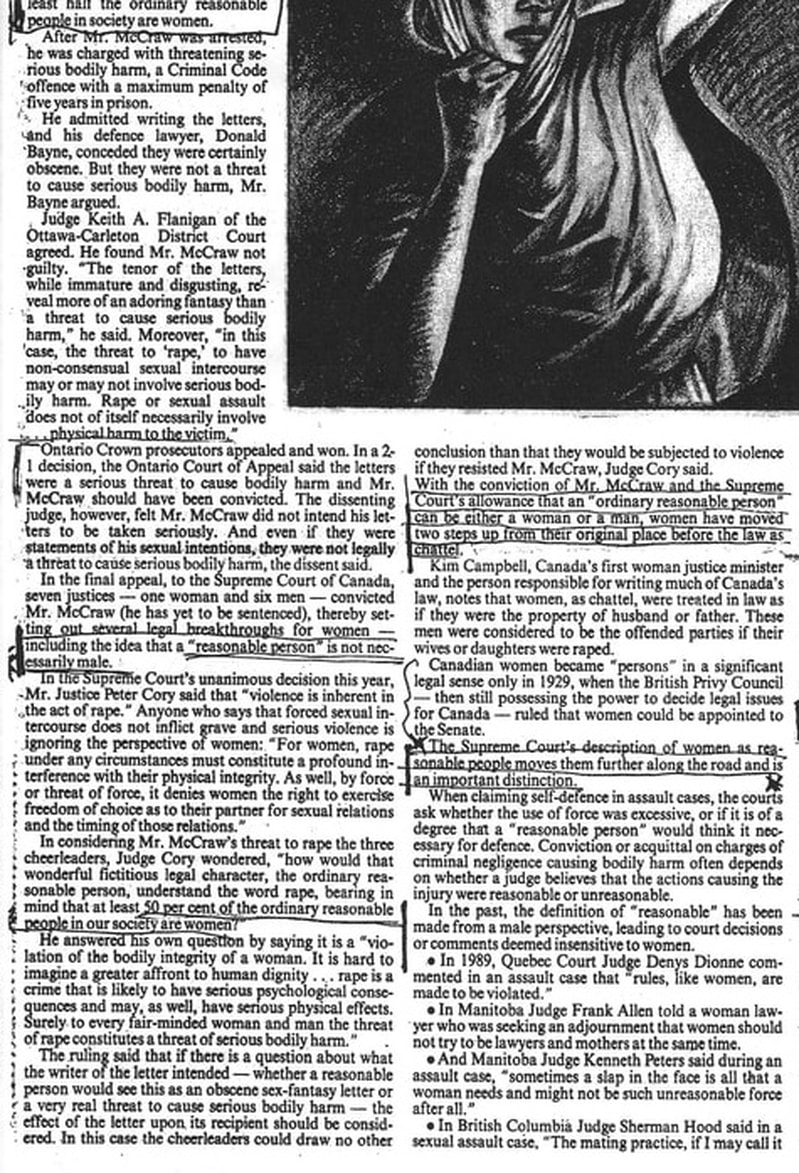 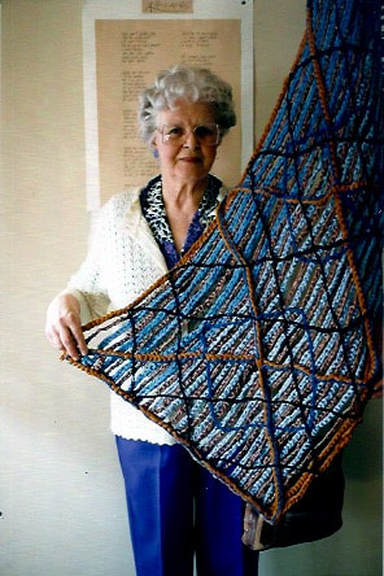 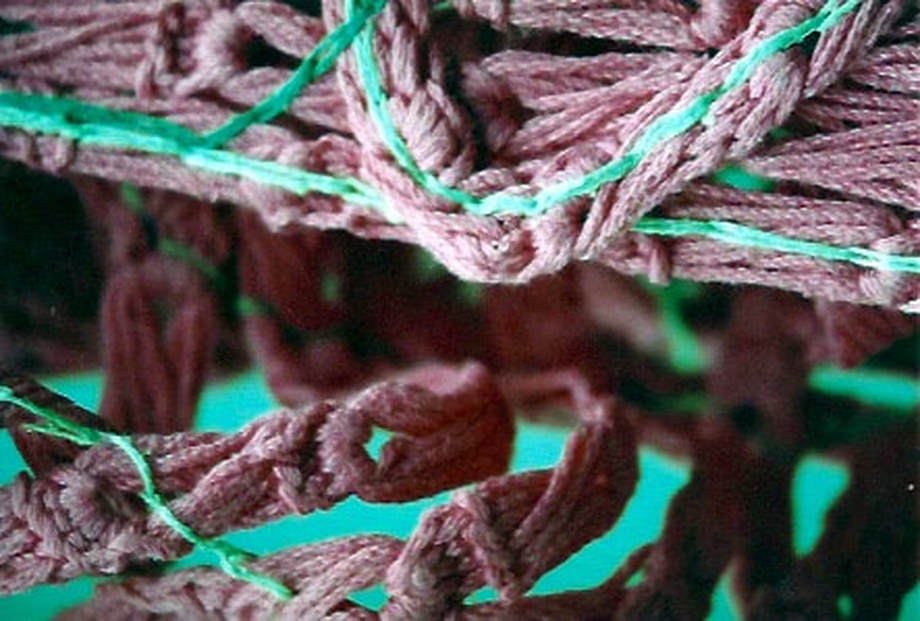