Download File
Feminist spin coordinators Mary Lou Riordon-Sello and Joan Caplan invited curators, selectors, programmers, and owners of Galleries in Calgary- including commercial galleries, museums, artist run centres, magazines, theatre, and women's groups, to program their spaces with Feminist Practice for the month of March 1994. The depth and diversity of Feminist Practice within the Calgary community is evidenced by enthusiastic and challenging responses to letters, phone calls, meetings, and from the support of feminists who continually nurture their communities. With the many threads gathered through this process, a fluid weave of lively community collaborations and individual multidisiplinary exhibitions and discussions form the fabric of feminist spin.
​      from the Calendar above. Click to open file above.
Excerpts from the ESSAYS written about feminist spin

"With few exceptions, women in most cultures have remained outside the art world's core of power and centre of influence. Women's art traditionally has been assigned to a separate intellectual category, that of the "feminine", and organizationally to a rather subordinate position in the negotiation of the governing standards, discourses and directions of the art world." ...

" I had no doubts that Feminist Spin would be colorful, lively, diversified and challenging, but I was in awe when I received the programme of events: over fifty them, in a dozen venues, across town and across disciplines, taking place from noon until late at night. Never before would I have imagined that the time would come where I had to make a choice between concurrent feminist events!  Quite a few times I had to make such choices, but those I attended never disappointed me, as efforts to spin a story, to listen and respond, to make connections, some more lasting and colorful than others."  ...

.... " Public dialogue is the first step in sharing public life: continuing dialogue is needed in order for members of any group to develop coalitions, to understand their positions/positionings without force or violence. Joan Caplan and Mary Lou Riordon-Sello created for us a 'safe' place during the month of March 1994, making dialogue possible. That the safety of the space they created was felt could be seen in the expressed vulnerability of those who participated- emotional, cultural, political vulnerability. "

..."The IWD March was the political kick-off for Feminist Spin. Feminist Spin was a multi-disiplinary month-long cultural event showing the "depth and diversity of feminist practise within the Calgary community" according to the coordinators Joan Caplan and Mary Lou Riordon-Sello.  The symbolism of the March started politically at Calgary's City Hall, and ended in the Glenbow Museum with a spiritual celebration by composer Marcia Epstein called Laudes Matris: A liturgy for God the Mother. Involvement crossed cultural art boundaries. It included grass-roots people in the March who made it happen, to support from large institutions such as the Glenbow Museum host of many programmes associated with Feminist Spin. The event echoed "the intermingling of media" in the feminist art community according to the two coordinators. These means varied from art exhibitions to choral music to lectures, performances, literary pieces, hands-on art lessons and workshops, to videos. Feminist Spin reached out to a broad spectrum of people throughout the city"

..." they determined to use their skills and resources in collaborative, cross-cultural, community based projects informed by feminist theory and designed to bring attention  to the social conditions of women. These projects provide an example of the expanded possibilities for art today. Among them was The Feminist Works From Glenbow's Art Collection, an exhibition at the museum from March 1994 to March 1995 and which Joan and Mary Lou initiated as the organizers of Feminist Spin, a city-wide cross-cultural, community based visual art project held in March 1994.  Their fourth such project, Feminist Spin brought together public and commercial galleries, secondary and post secondary teaching institutions, and several media venues and public sites in a month-long program of exhibitions, performances, lectures, panel discussions, workshops, screenings and social events, all with free or sliding scale/pay-what-you-can admissions. It drew participants and audiences from a broad cross-section of the city's population, many of whom had not previously entered an art gallery or museum.
Because the Glenbow is promoted as the repository, custodian and presenter of Calgary's largest art collection, it was important to Joan and Mary Lou that the museum participate in Feminist Spin. As stakeholders in the museum, they requested and secured the museum's agreement to exhibit its feminist art works. Joan, Mary Lou and I agreed to collaboratively co-curate the exhibition. As a result of many lengthy and lively debates about our curatorial thesis and our selection criteria, we co-authored a curatorial statement, a portion of which follows:

In our exploration of the Glenbow's art collection [of 16,964 pieces ] we sought works by women that somehow critiqued  established conventions of mastery, monumentality, heroism, seamlessness, transcendence  and the authentic autonomous fine art object. We looked for works that examine the nature of power, gender and sexuality. or that privilege the female voice or the domestic arena. Or refer to craft or other realms traditionally marked as feminine and thereby devalued. Or artworks that investigate the attribution of symbolic and social subjecthood, or that consider the body as a construction site of identity. We located and identified 14 feminist pieces, the works by Canadian artists Gisele Amantea, Kyra Fisher, Susan Ford, Faye Heavyshield, Colleen Kerr, Rita McKeough, Colleen Phillipi, Mary Scott, and Helen Sebelius." ....

..."The ARTemisia Project, is in one sense, a tribute to women artists through history whose contributions lack documentation and acknowledgement. This project aims to identify and develop resources that redress inequities in the portrayal of women's art and art forms. The story of Artemisia Gentileschi  is a starting place. The ARTemisia Project celebrates the inner strength of Artemisia and explores ways to form such strength and commitment in female art students today. Thus, her story serves as a springboard for this project which seeks to provide gifted female art students access to the art knowledge, learning processes, and role models they need to consider and pursue art careers." ...

a letter to Feminist Spin

"i would like to thank you for giving Meg Van Rosendaal and myself the opportunity to display our work in the YWCA Showcase.
....'I Used To Think I Was Tall ' is about self perception, individuality, differences and similarities. It is about maintaining one's sense of self in the presence of others. It is about friendships and relationships in every sense of the word. It is about harmony and co-operation. It is about sharing. It is about being female.
....Thank you again for allowing us to display our work at the Y, but more significantly thank you for providing us with the opportunity to reconnect with each other. We both feel fulfilled and proud of the result."

From the Glenbow Museum 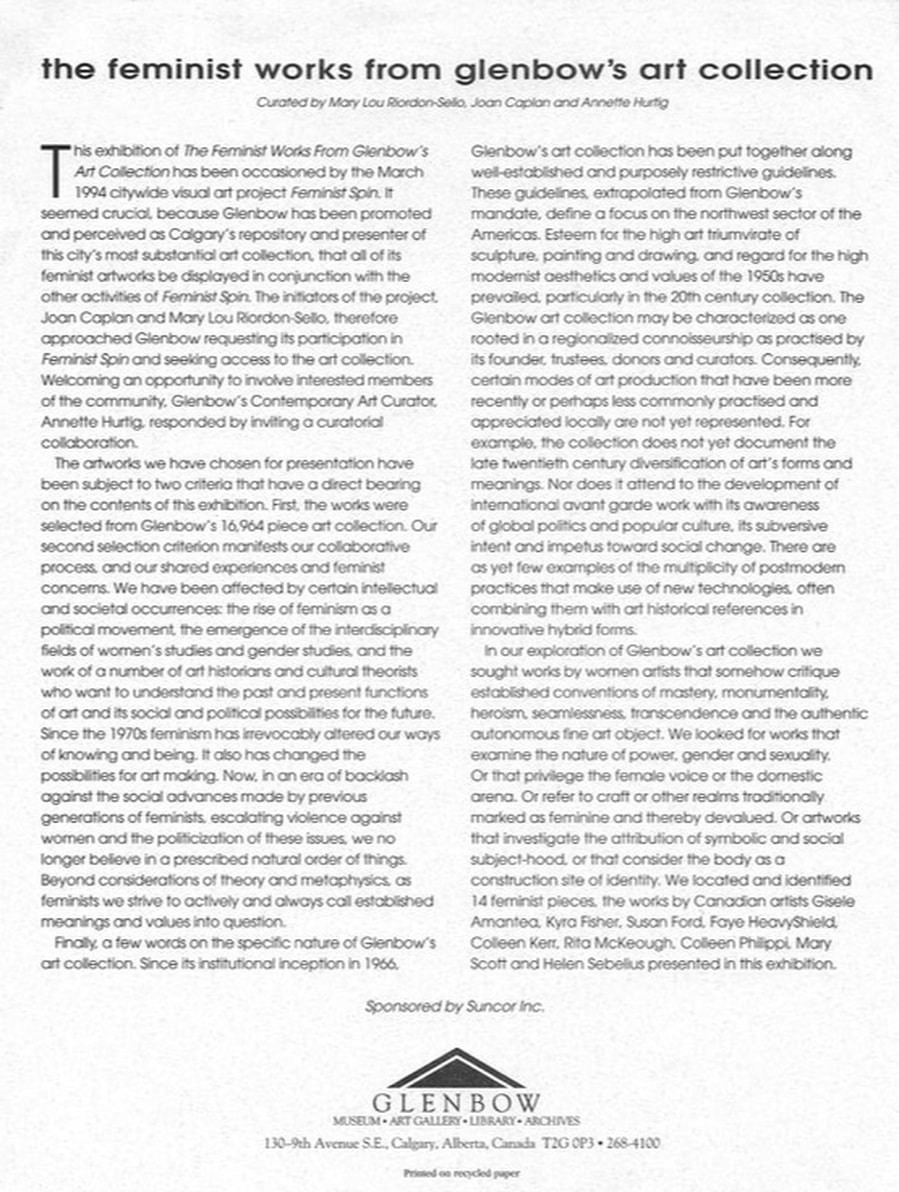 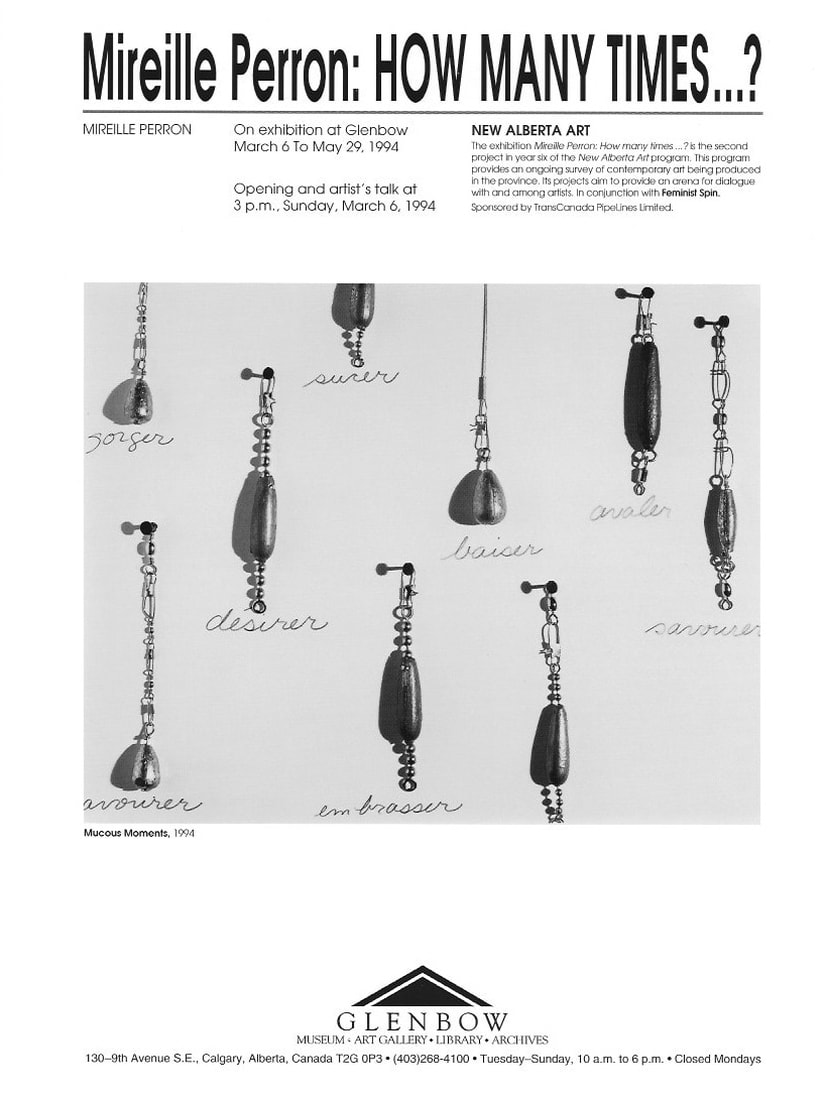 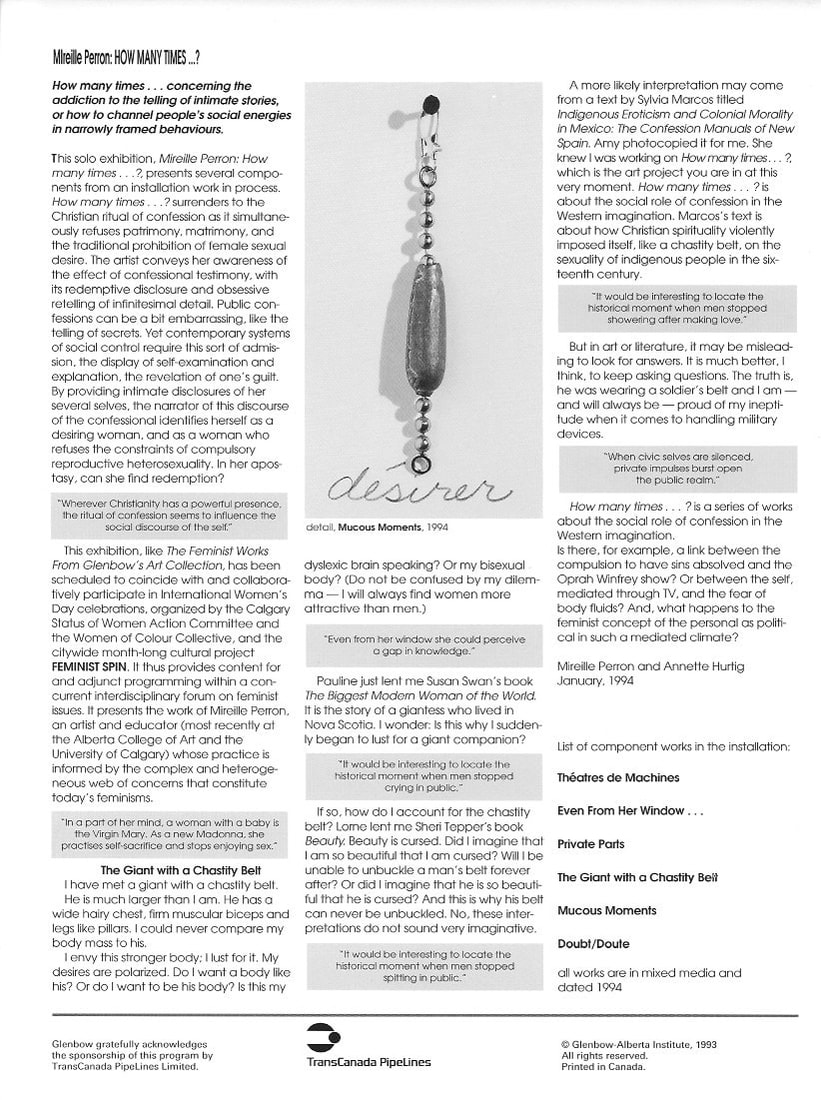 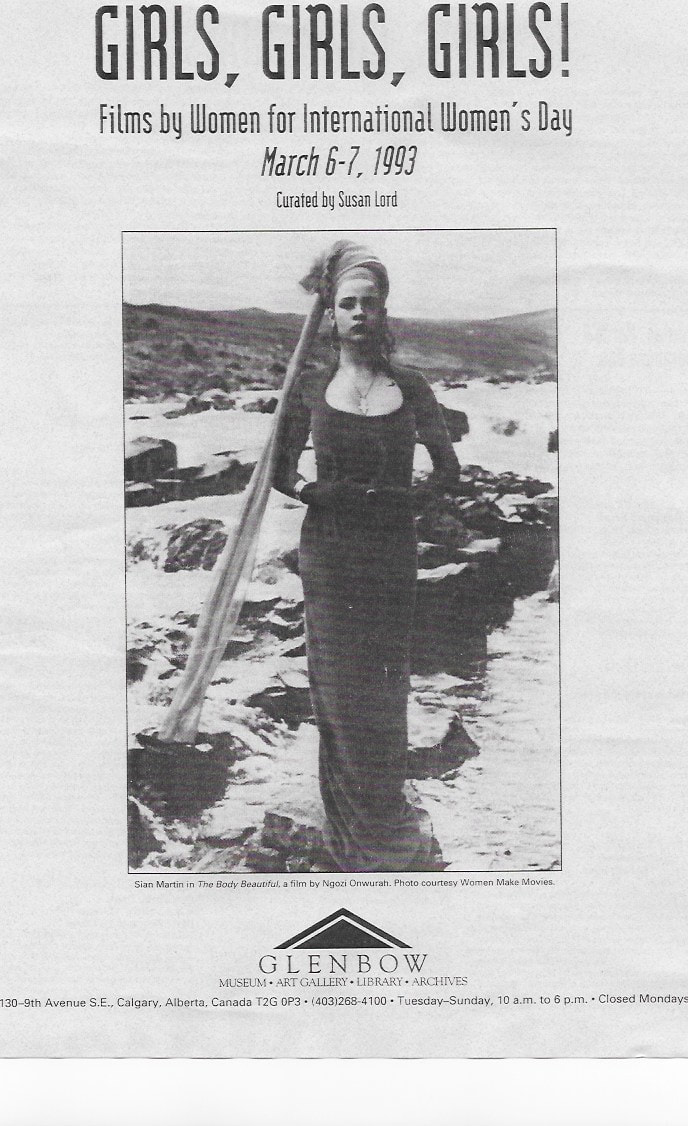 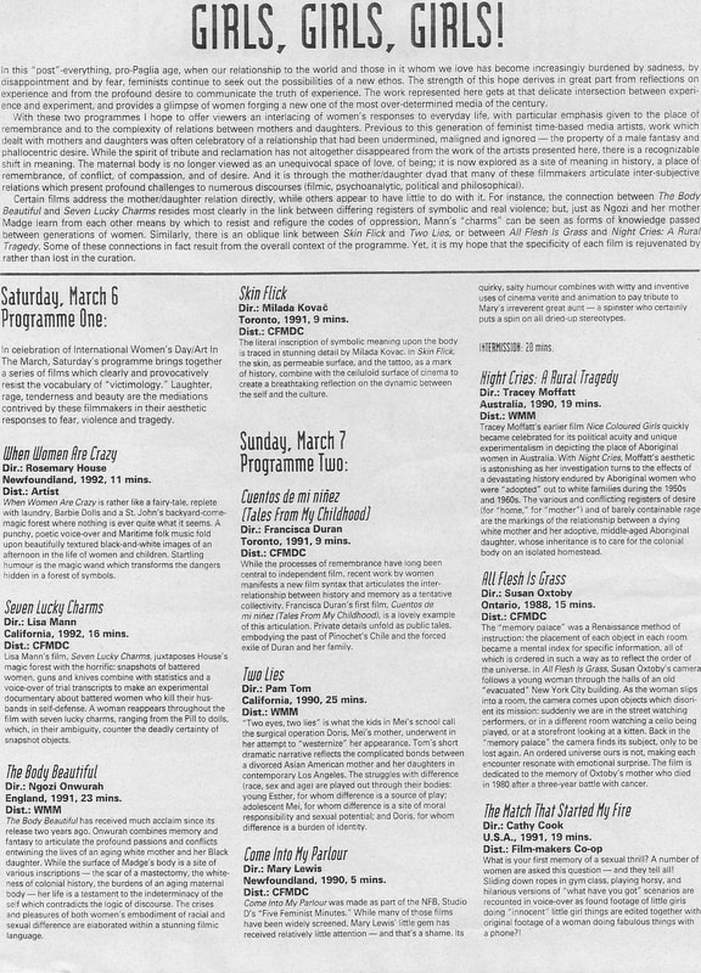 A few of the Projects 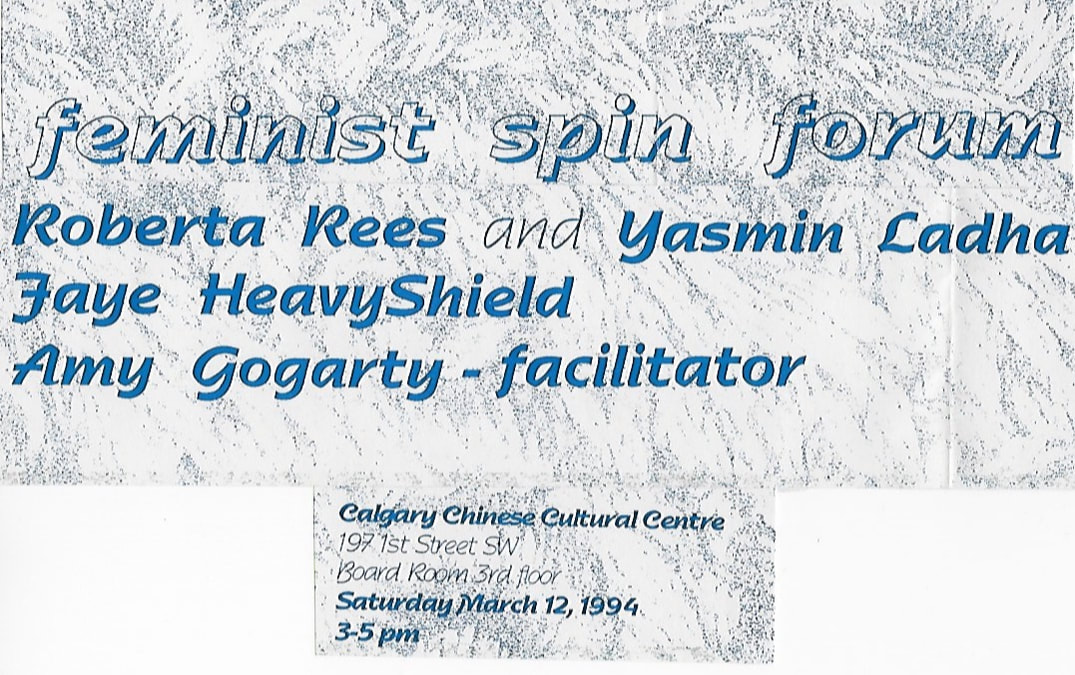 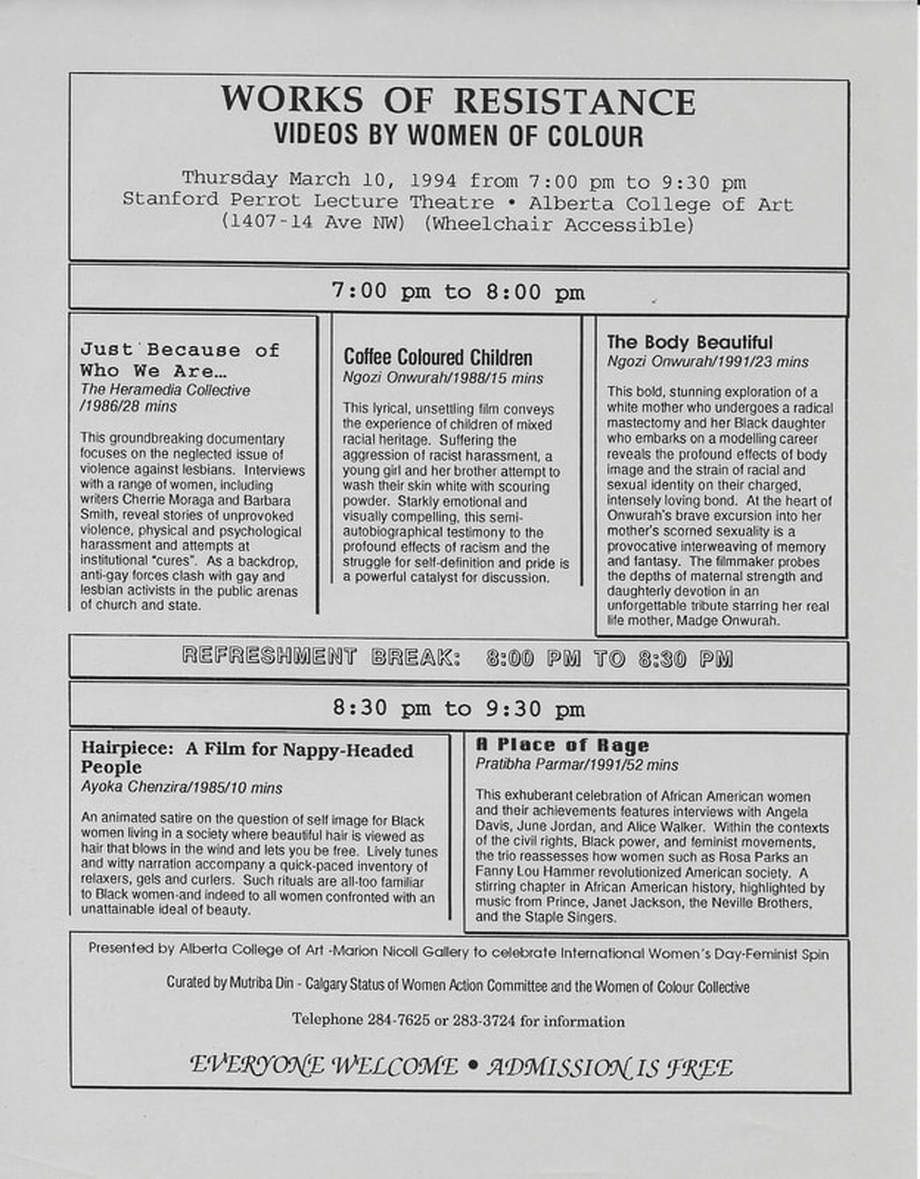 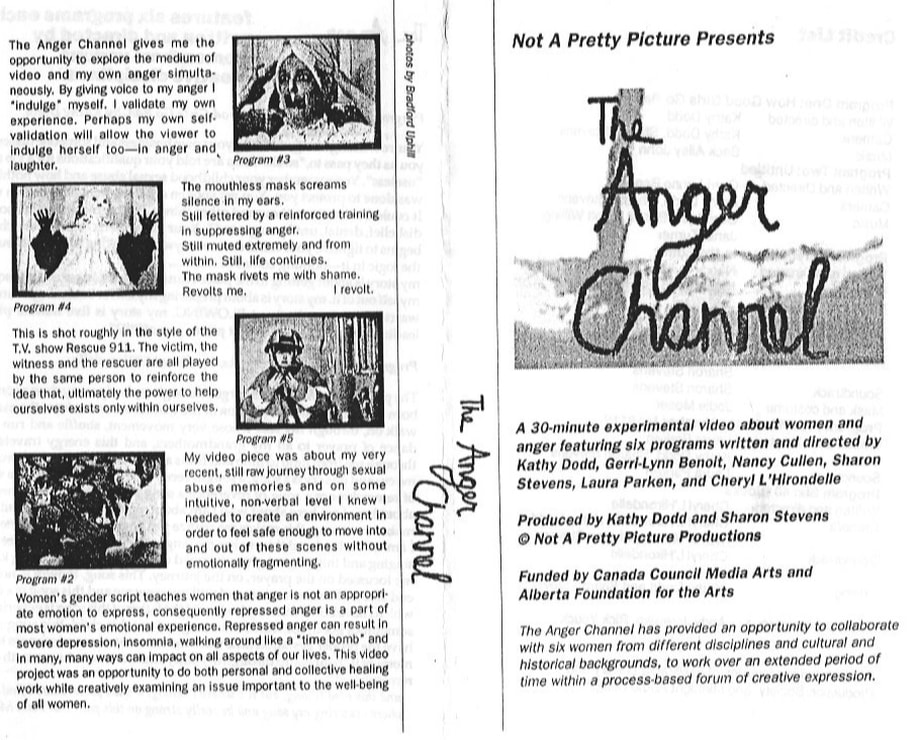 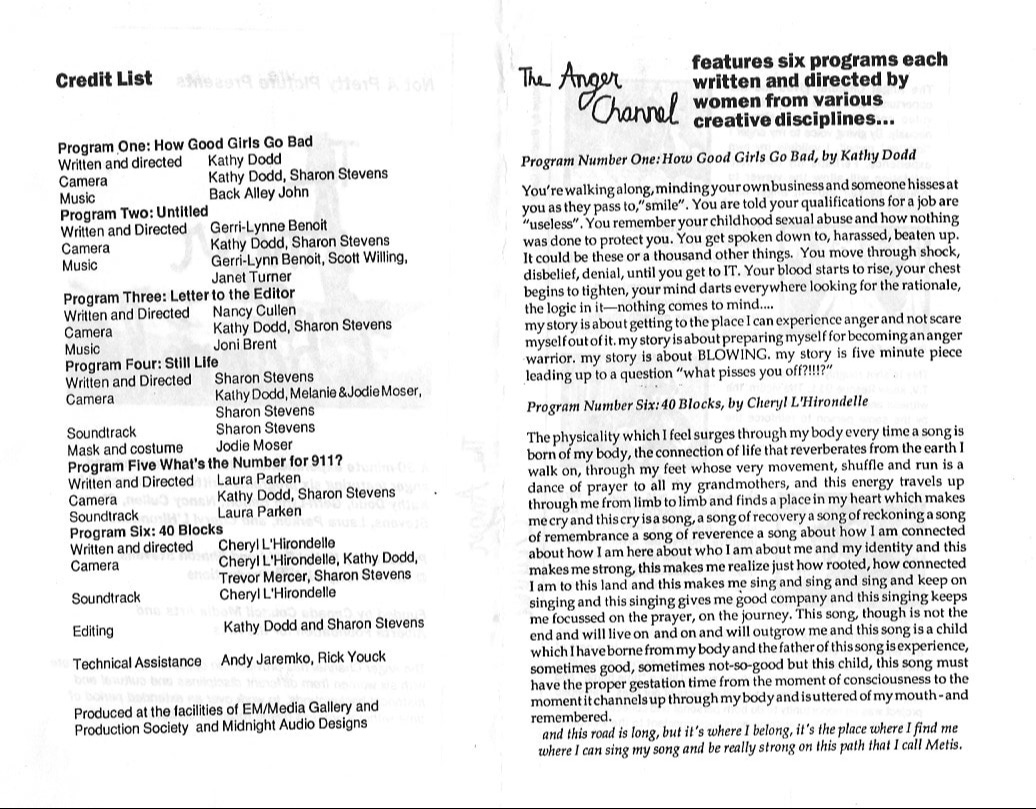 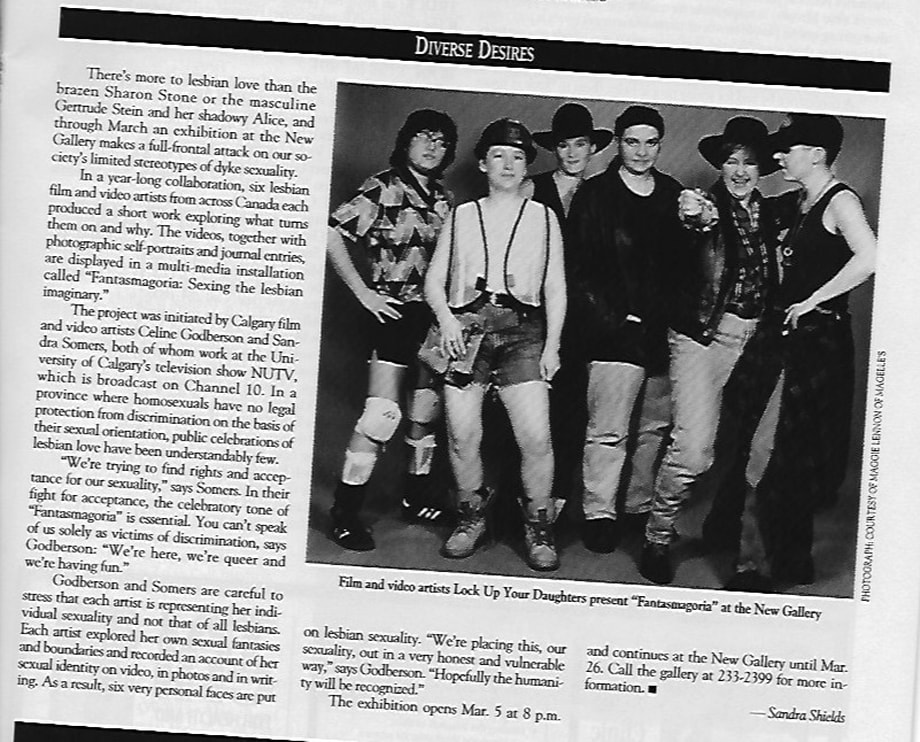 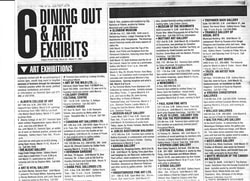 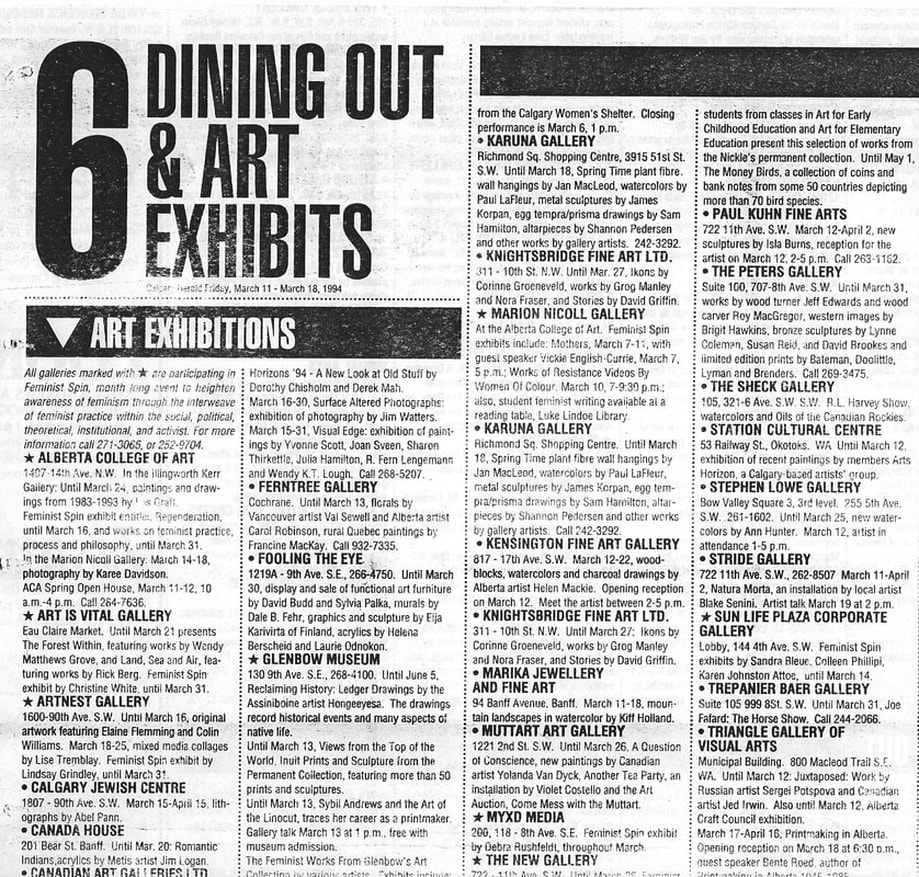 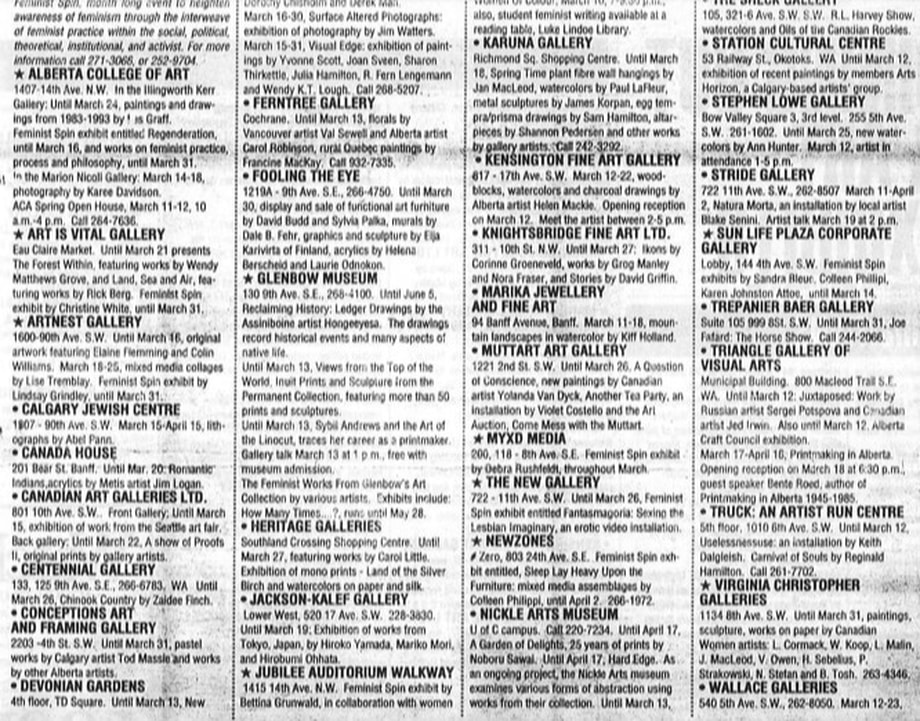 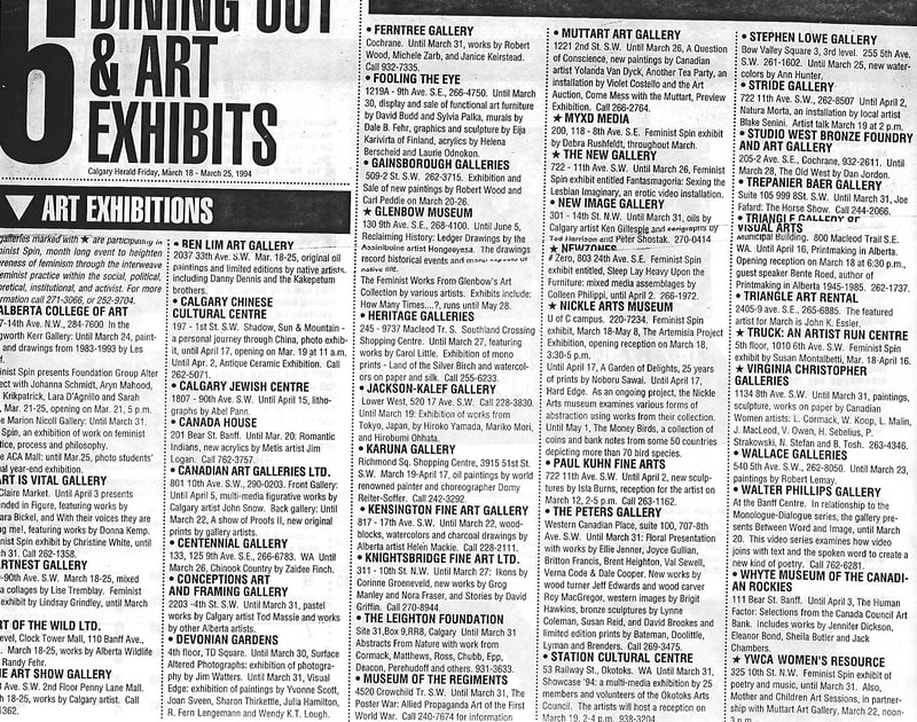 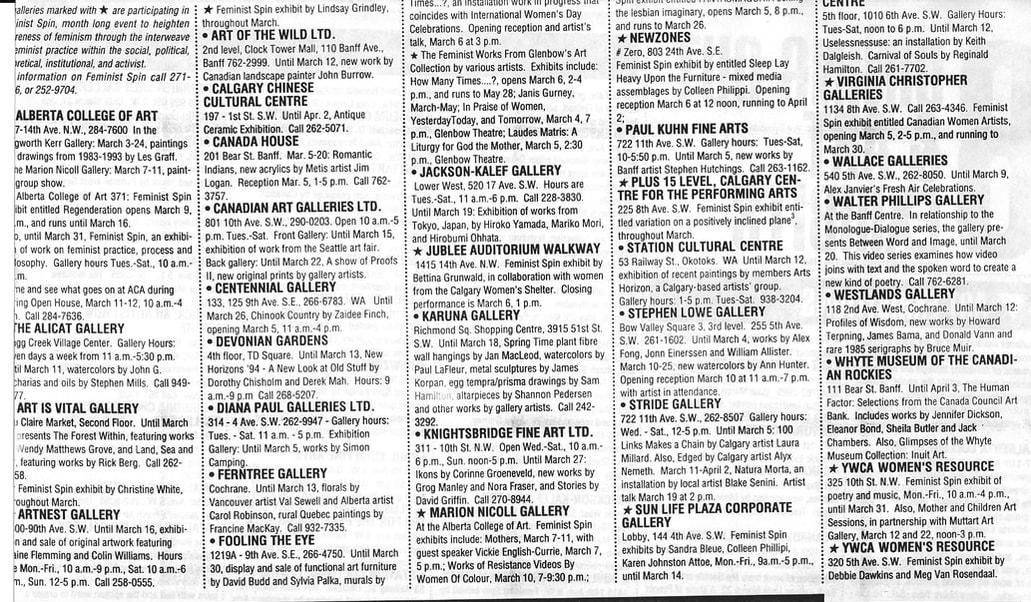 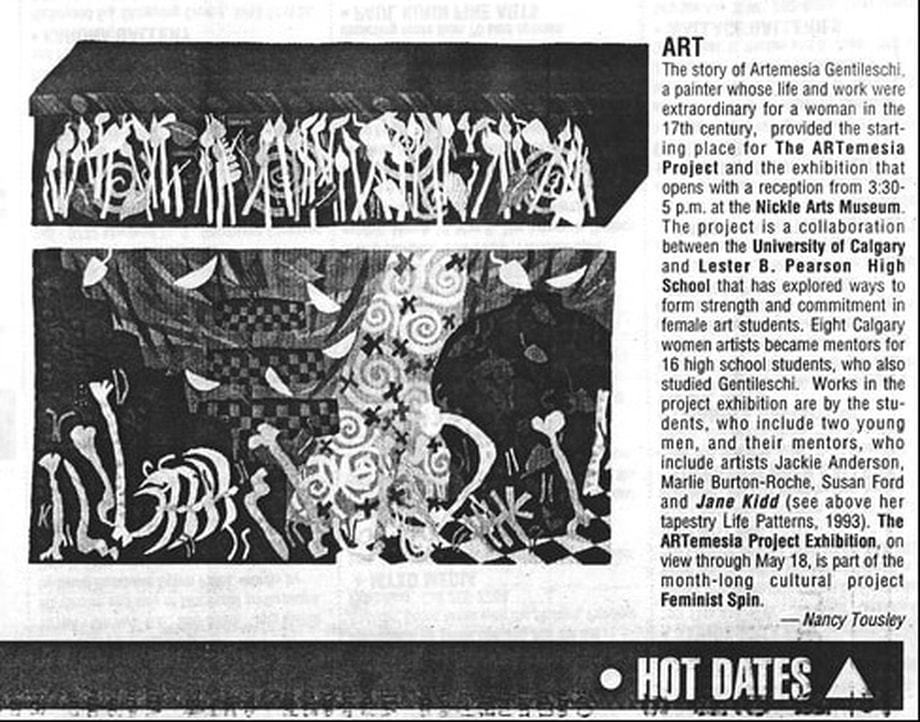 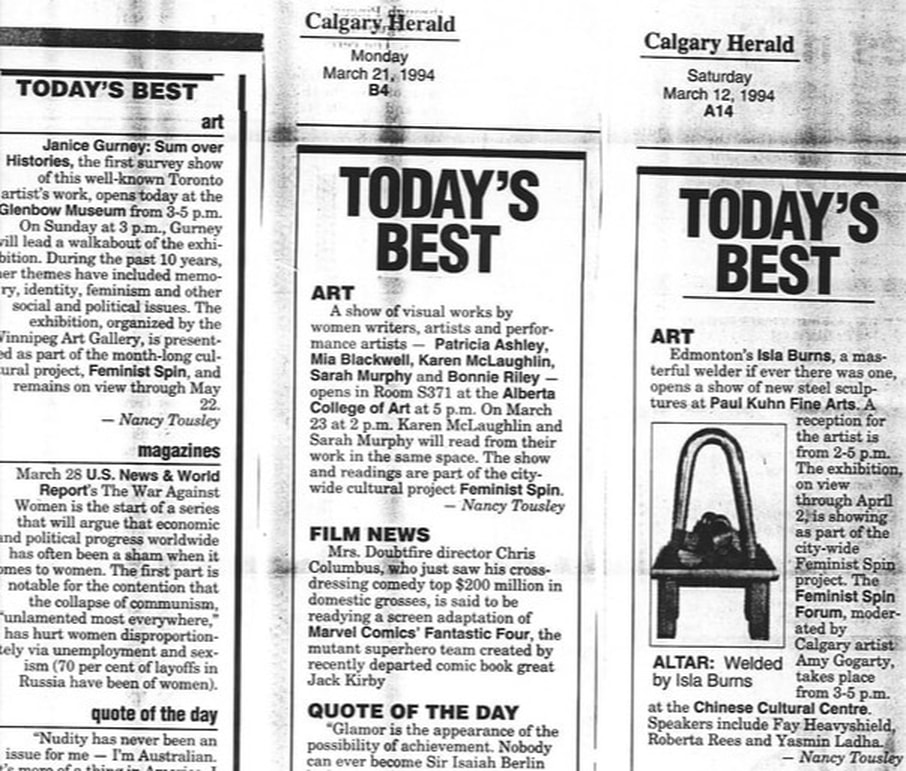